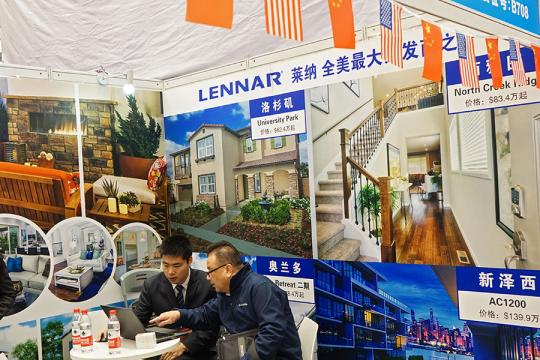 Over the past 10 months, Bei Qin, a realtor in Silicon Valley, California, has not had any clients from China, a market that used to be her major source of business.

"We had the best business in 2016 and 2017. Every day, we had inquiries from Chinese buyers and every week our WeChat account had more than 10 new subscribers," said Qin, president of ACEQ Investment Group in Cupertino. "Now, those days are gone."

After a decade of increasing investment by wealthy Chinese in residential property purchases in the United States the biggest proportion of international buyers for seven consecutive years purchases plunged by 56 percent in the 12 months to March, according to a report by the National Association of Realtors, or NAR.

During that period, Chinese buyers acquired real estate in the US worth $13.4 billion, compared with $30.4 billion a year earlier. They were followed by Canadians, who bought homes costing a total of $8 billion, according to the report.

"But increasing trade tension rhetoric may also have dented confidence about buying in the US, along with uncertainty over whether travel restrictions would be applied in the future."

Juwai, China's largest international property website, has forecast that the downward trend among Chinese buying homes in the US will continue next year, with the estimated total amount falling to $10 billion to $12 billion by March.

Inquiries by Chinese for US properties were down by 27.5 percent year-on-year in the first quarter, and have fallen for four of the past five quarters, according to the website.

California, the top destination for Chinese residential investment in the US, is feeling the impact.

Oscar Wei, senior economist and director of research at the California Association of Realtors, said the trend in the state is not as "dramatic" as portrayed by the NAR report. "The proportion of Chinese buyers among international ones has slowed a little compared with last year," he said.

Uncertainties created by trade tensions between China and the US, along with homes costing more due to the yuan weakening, have played a role in the decline, he said.

The US government has threatened to place tariffs on virtually all Chinese-made goods, including $300 billion of imports, on top of the 25 percent tariff already imposed on $250-billion-worth of products from the country. But the administration has delayed some tariffs until next month because of concerns about economic fallout.

"The tariffs would lead to an increase in consumer prices. Eventually, when you have inflation, that's going to affect overall prices-not just consumer prices but also those for homes. It would affect people's desire to buy property," Wei said.