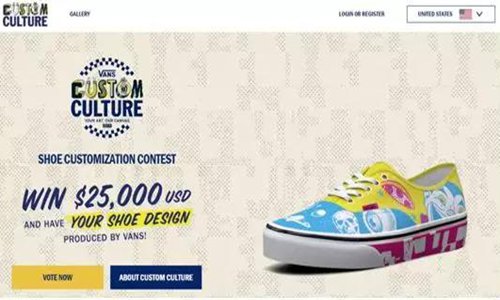 Chinese mainland customers urged U.S. shoe-maker Vans to clarify its stance on Hong Kong after the company's response failed to quell the customers' anger despite its removal of a controversial shoe design.

They warned the U.S. brand - which has seen robust revenue growth on the China market - not to follow the path of the NBA's Houston Rockets, to abide by Chinese regulations and respect the feelings of Chinese people who oppose Hong Kong riots.

The controversial design was reportedly uploaded by a Canada-based user during the annual Vans Customs Culture competition, where voting opened to the public on October 1 and will be ended on October 13.

The design featured a red bauhinia, the flower on Hong Kong's flag, a yellow umbrella and images of people in hard hats, goggles and gas masks - the typical clothing of anti-government forces in Hong Kong.

Vans withdrew the design on the following day. In a statement posted on Vans' Facebook account the same day, the company confirmed that "a small number" of submissions had been removed.

"This decision was taken to uphold the purpose of Customs Culture… As a brand that is open to everyone, we have never taken a political position," it said.

When contacted by the Global Times, a customer service employee of Vans China's website said that the company has "already disqualified the design from the global competition after they found out it does not comply with the competition rules."

"The design and the creation only represent the personal view of the participant, and it has nothing to do with the brand's stance," said the employee.

"I will wear Vans from tomorrow," Weibo user daxiongbaba posted.

A 29-year-old Beijing worker, who only gave the surname Chen, told the Global Times on Tuesday that he appreciated the U.S. firm's decision to remove the controversial design.

"But I'm kind of disappointed at its slow reaction and its vague stance on Hong Kong issues," Chen said. "It crossed my bottom line. I may give a second thought when choosing shoes brands."

Vans' revenue grew 17 percent in China and 9 percent in the U.S. for the financial year ending on March 30, media reports said.

Yang Qingshan, a professor at the University of International Business and Economics in Beijing, urged the U.S. brand not to be the "next Houston Rockets" that "hurts the feelings and emotions of Chinese people" and traps itself in a business woe.

"It needs to show its clear attitude and stance on Hong Kong issues to win support from Chinese customers," Yang said.