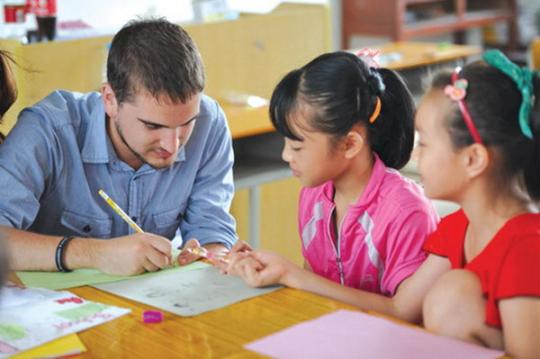 A recent survey has found that Japanese lag Chinese in English skills, as Japanese policymakers are having rows over moves to reform the country's English exam for university admissions.

For a fourth-straight year, Japan's ranking in a measure of English proficiency remains low this year. The country was handed 53rd place in the survey by EF Education First. The Switzerland-based language training company evaluates the English skills of people in 100 countries and regions.

On the 2019 list, the Chinese mainland moved up to the bracket of moderate proficiency in general for the first time, with a score of 40. Hong Kong came in at 33, with Taiwan at 38, and Macao 41.

Minh Tran, a co-author of a report accompanying the survey findings, credited curriculum revisions on the Chinese mainland for the improvement. These reforms put a priority on communicating in English; in contrast, Japan was noted as having an education system that didn't prioritize real-life communication skills.

The report said: "Forty years after China opened itself to foreign investment and private business, the country's transformation has been remarkable. Two-thirds of the world's decline in poverty since 1990 occurred in China."

China was a replicable model for other countries, the report said, in the way it moved from "memorization-driven to communication-driven teaching", transforming universities into world-class research institutions that publish in top English-language journals.

"Few political leaders can exercise this kind of long-term planning and control over their countries, but the pillars of China's strategy offer a replicable model for how policy reform and targeted investment can raise a country's English proficiency level," it said.

The 2019 rankings are based on the results of a free online proficiency exam taken by 2.3 million people in non-English speaking countries worldwide. As a result, the Netherlands gained first place, while Singapore topped the Asian rankings.

Wednesday's report came out soon after a decision by the Japanese government to delay the planned introduction of private-sector English proficiency tests as part of standardized university entrance exams in April next year. That decision has been linked to a controversy surrounding comments by the country's education minister.

On a TV program in late October, Education Minister Koichi Hagiuda triggered an outcry when he said students should compete for university spots "in accordance with their (financial) standing". He made the comment in response to a question about the fairness of using private English tests, given the concerns over the cost of exam fees and travel costs for ordinary students, as well as teachers.

His comments drew criticism from both the ruling and opposition parties in Japan. Hagiuda was forced to retract his comment and apologize to the students and their parents, as well as the businesses involved.

He said the ministry will spend a year looking into the problems with the exam system, including whether private-sector tests should be used at all, and will aim to introduce a new system for the 2024 school year.