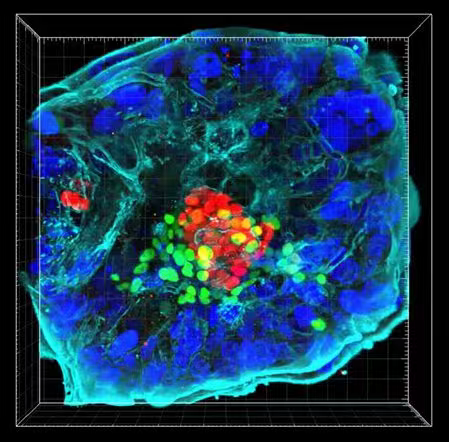 In a world first, Chinese scientists have succeeded in growing monkey embryos in a laboratory for 20 days, giving a rare glimpse into the earliest stages of development of advanced mammals, including humans.

There is a worldwide ban on growing human embryos in a lab for more than 14 days after fertilization due to ethical concerns, so the research team from the Chinese Academy of Sciences used embryos of crab-eating macaques, a species close to humans in terms of physiology and evolutionary advancement. The work was completed in labs in Beijing and Kunming, Yunnan province.

Previous experiments on growing primate embryos tended to stall at around eight days, preventing researchers from observing gastrulation, an essential and enigmatic step during which cells begin to divide and differentiate into three layers that will eventually produce different organs and tissues.

The latest breakthrough will boost basic understanding of the gastrulation process and the mechanism behind the embryonic development of humans.

Wang Hongmei, a researcher with the academy's Institute of Zoology and a lead scientist in the experiment, said the team aims to further extend the active period of monkey cells.

"We are now able to track the emergence of the reproductive system and the nervous system," she said. "In the future, we intend to see the initial form of heart systems and other fields that pique our interest."

In China, about one in eight couples of childbearing age is infertile. Further, the rate of spontaneous miscarriage has reached 30 percent and that of birth defects 5.6 percent.

"The discovery will lay a solid foundation for diagnosing the causes of abnormal pregnancy and fetal anomalies," said Qiao, who was not involved in the research.

About 30 percent of the 167 macaque embryos in the experiment remained alive and active at 20 days, said Li Lei, another researcher at the Institute of Zoology involved in the research.

The results were published online in the scientific journal Science on Nov 1.

"Perhaps the most surprising finding for me is that the authors were able to culture the embryos up to day 20(which is beyond gastrulation)," said Magdalena Zernicka-Goetz, a professor at the University of Cambridge who has pioneered global work in culturing embryonic cells in a dish.

"It's a true achievement as now there is a system to study gastrulation in vitro in a model very similar to the human embryo."