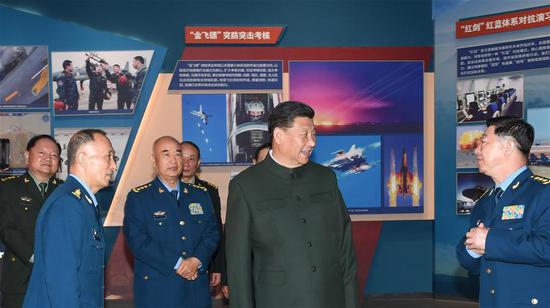 Xi, also general secretary of the Communist Party of China (CPC) Central Committee and chairman of the Central Military Commission (CMC), made the requirement while attending an event celebrating the 70th founding anniversary of the PLA Air Force in the northern outskirts of Beijing.

On behalf of the CPC Central Committee and the CMC, Xi extended congratulations on the air force's founding anniversary and greetings to all its service personnel.

At the China Aviation Museum in Beijing's Changping District, Xi presented a flower basket and bowed three times to the deceased heroes of the air force.

Xi stressed always remembering the heroic deeds of the martyrs and passing on their heroic spirit from generation to generation.

Afterward, Xi visited an exhibition marking the anniversary and met with representatives of model units and individuals of the air force.

Under the strong leadership of the CPC, the air force has made widely recognized achievements in its development over the past 70 years, and accomplished immortal feats in safeguarding national sovereignty, security and development interests, proving itself to be a force that the Party and the people could rely on, Xi said.

Standing at a new historical starting point, the air force should implement the Party's thinking on strengthening the military and the military strategy for the new era, stay true to the founding mission, pass on the fine traditions and break new ground to fully build a world-class air force, Xi said. （Updated）