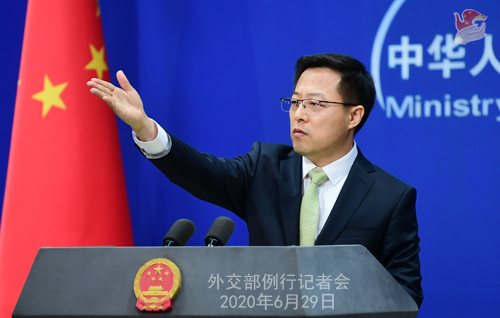 China will impose visa restrictions on US citizens who have "behaved egregiously" over Hong Kong-related issues, in response to visa restrictions from the United States, Foreign Ministry spokesman Zhao Lijian said on Monday.

Zhao made the announcement at a daily news conference. He said the Hong Kong Special Administrative Region national security legislation is purely China's domestic affair, and no foreign country has the right to interfere in it.

The announcement came one day after the Standing Committee of the 13th National People's Congress opened its 20th session, at which a report was made on the draft national security law for Hong Kong.

The US, which has threatened sanctions on China over the legislation, announced on Friday visa restrictions on Chinese officials over the HKSAR affairs.

"The US will never succeed in its attempt to obstruct, through so-called sanctions, China's efforts to push forward the national security law for Hong Kong," Zhao said.

The central government is firmly determined to safeguard China's sovereignty, security and development interests, carrying out the "one country, two systems" principle and opposing any foreign interference in Hong Kong affairs, Zhao added.

He also dismissed the "Hong Kong Autonomy Act" and a resolution passed by the US Senate that threatened sanctions on Chinese individuals, entities and financial institutions and criticized the national security legislation for Hong Kong.

China is firmly opposed to and has lodged solemn representations with the US over the passage of the bill and the resolution, Zhao said.

By passing the bill and the resolution, the US Senate has denigrated the Hong Kong national security legislation, interfered seriously in Hong Kong affairs and China's domestic affairs and violated international law and the basic norms guiding international relations, he said.

The bill and the resolution are only "a piece of wastepaper", Zhao said, urging the US not to go ahead with them, or even use them as an excuse for imposing so-called sanctions on China.

"Otherwise China will take resolute and powerful response and countermeasures, and the US will take all the consequences," Zhao added.

The Hong Kong national security legislation aims to protect China's sovereignty, security and development interests, guarantee long-term stability and prosperity in the SAR and ensure the steady implementation of the "one country, two systems" principle, he said.