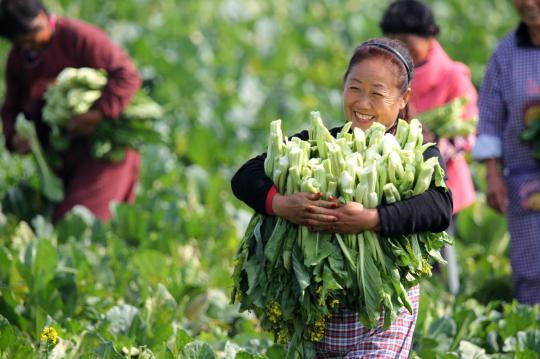 The central government has ordered a census on the rural population who recently escaped absolute poverty, as part of a broader effort to verify poverty data offered by local authorities, according to a circular on Monday.

It will be the nation's first census of the impoverished population.

The State Council circular said the census, which was planned to conclude early next year, is an "important and basic work" of China's sweeping anti-poverty drive, as well as an all-around test for the campaign's "effectiveness".

The survey is designed to verify if local government's poverty data are accurate and authentic, and is expected to provide data to help understand the livelihood of vulnerable communities and help central authorities decide when to declare victory in finishing the building of a moderately prosperous society in all aspects, known as xiaokang.

The survey will be conducted in 832 counties labeled as impoverished in 2015, in addition to seven poorer prefecture-level cities in Xinjiang Uygur autonomous region and a number of other central and western counties. All administrative villages, and residents registered as part of the impoverished populations since the start of the campaign, would be surveyed.

Those surveyed should offer relevant data in a "true, accurate, complete and timely manner", and cannot falsify or conceal data, or delay or reject the survey. Census officers and local governments were also warned against tampering with data.

The circular pledged "advanced information technology" would be adopted to ensure data quality, adding people attempting to disrupt the survey shall also be punished accordingly.