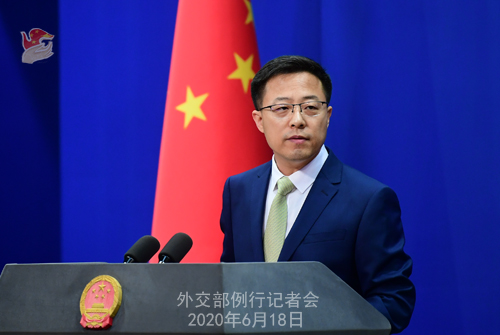 The decision by China's National People's Congress and its standing committee's legislation of establishing and improving a legal framework and enforcement mechanism for safeguarding national security in the Hong Kong SAR aims at filling in a national security legislative gap there, Zhao said.

The state-level effort in itself is an illustration of the "one country, two systems" principle. It is designed to ensure this principle's sustained and steady implementation and to maintain Hong Kong's lasting stability and prosperity.

China has repeatedly stated that the core of the Sino-British Joint Declaration is to establish China's resumption of sovereignty over Hong Kong, Zhao pointed out, adding that the Constitution of the People's Republic of China and the Basic Law of the HKSAR form the constitutional basis of the HKSAR.

China is firmly determined to advance this national security legislation in Hong Kong, Zhao said, urging relevant sides to read through the Basic Law, take an objective and just view of the legislation, abide by international law and basic norms of international relations, and stop meddling in Hong Kong affairs and China's internal affairs.