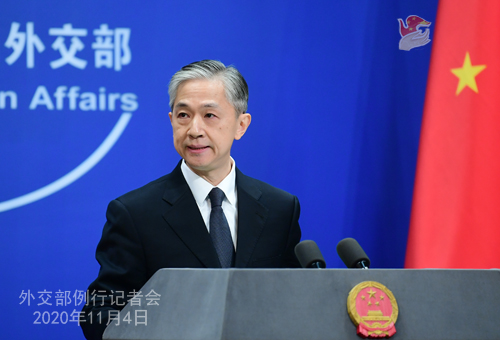 (ECNS) -- China will continue working with Pakistan to forge China-Pakistan Economic Corridor (CPEC) into a demonstration program for quality BRI cooperation that benefits the people of China, Pakistan and the whole region, said Wang Wenbin, spokesperson for China's Foreign Ministry.

China firmly supports the building of CPEC, Wang made the remarks at a regular press conference in Beijing on Wednesday.

"The CPEC is an important pilot BRI project and flagship for China-Pakistan bilateral cooperation. Since its building started more than seven years ago, major progress has been achieved and a lot of projects have been launched or completed, bringing over $25 billion of direct investment to Pakistan," Wang said.

In a meeting with new Chinese Ambassador to Pakistan Nong Rong on Tuesday, Pakistani President Arif Alvi said that China's development brings important opportunities to the region and the whole world, adding that Pakistan will unswervingly push forward bilateral ties and the implementation of the CPEC.

Last month, Orange Line, an early harvest project under CPEC, was inaugurated in Lahore, introducing an era of metro train services for Pakistan.

The CPEC contributes to not only economic and social development in China and Pakistan, but also regional connectivity and common development, the spokesperson maintained.

Nearly 20,000 tons of commodities like wheat, sugar and fertilizer have been transferred via Gwadar Port to Afghanistan since the first half of the year, creating almost 1,000 jobs in the process.